Lena Dunham, GIRLS, and the Contradictions of Fourth Wave Feminism 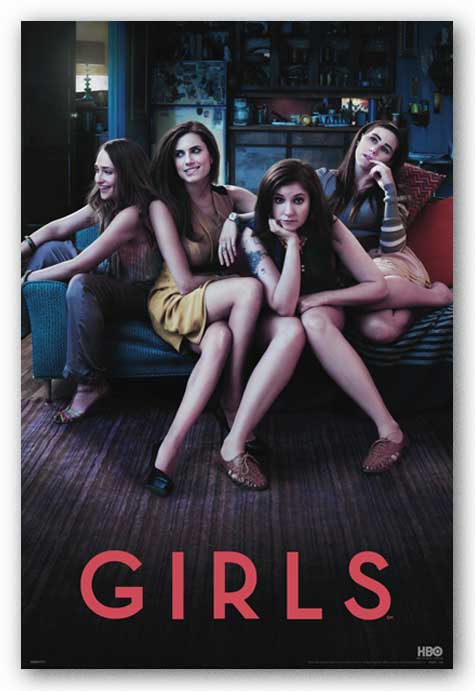 Second edition out now with updates from the Trump era!

As the title of the HBO series indicates, GIRLS (Lena Dunham/Judd Apatow, 2012- ) foregrounds the experiences of four young women living in New York City immediately after college, as they negotiate life, work, sex, and relationships. In its construction and content, the show navigates the uneasy, sometimes contradictory terrain of Second and Third Wave feminist perspectives on themes of the sexual objectification of women and female autonomy and agency. The show explores other themes relevant to Third Wave feminism including individual politics versus group solidarity, women in the workplace, inter-generational feminist politics, and race and class dynamics. Much attention has been given to the show’s treatment of body image, because of its female-centered perspective on sex and nudity and its irreverent focus on imperfect bodies (as with Dunham’s curvy, tattooed, hairy, small-breasted, unconventional-for-TV body). By showcasing these issues, the show features characters and creators who struggle to understand and challenge gender stereotypes. Unlike its all-girl HBO predecessor, Sex in the City, GIRLS actively embodies a feminist consciousness and acknowledges the politics of women’s bodies and their relationship to consumer culture.

This essay addresses the ways that GIRLS is an example of current feminist debates and shows how popular culture engages with feminist theory. Key terms and theories are highlighted in order to give readers an understanding of pertinent questions surrounding representations of women in the media, including the political economy of cable television, and the representational politics of women as makers, subjects, and consumers of media. For young, college-educated women of the Third Wave who have been educated by Second Wave values, there is an understanding of feminism that is grounded in the idea of the struggle for justice and equality- that the personal is the political, and that feminism emerges from everyday life. What isn’t always clear is the “map” for navigating the Third Wave world- for reacting to those everyday personal/political interactions which include: navigating sexual relationships; friendships between women (including their mothers); friendships between women and men; body image/self-esteem; sexual harassment in the workplace; women’s reproductive health; race/class dynamics; masculinity, violence, and pornography.What does this generation’s feminism look like? What patriarchal bargains is the show willing to make in order to answer this question? This essay investigates how these unresolved feminist issues are honestly explored by GIRLS in both its form (aesthetics, acting, music) and content (characters, storylines, extra-textual discourse), and gives readers a perspective on the current state of feminism in relation to representations of gender in the contemporary media landscape.