The Brave Stepped Back: The Life and Times of Laskarina Bouboulina 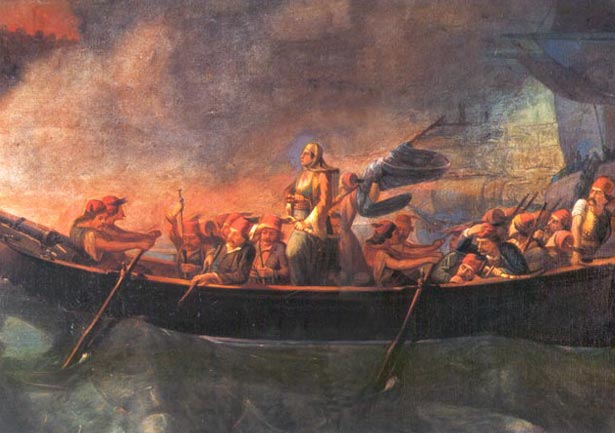 After more than 400 years of occupation by the Ottomans, in 1821, a series of social, political, cultural, and economic events convened in Europe which enabled Greece to spark the Greek War of Independence.  This national instability provided a space for the emergence of a heroine who broke all established gender codes in the area of politics and on the battlefield: Laskarina Bouboulina (1771-1825).  Over the course of her life, Bouboulina became self-educated, owned a successful merchant fleet, served as an international diplomat, built the largest Greek fighting ship of the war (the “Agamemnon,”) and was the only woman to join the Filike Etairia, an underground organization that prepared the Greeks for the war with the Ottomans.  She is the first woman in world naval history to have earned the title of Admiral for her command of the Spetses fleet in crucial naval battles.  Her life represents an alternative history to the masculinist and nationalistic depictions of the Greek War of Independence, as told in both Greek and philhellenic literatures.

The Brave Stepped Back: The Life and Times of Laskarina Bouboulinais an hour-long documentary film, produced independently by April Kalogeropoulos Householder, as part of a multi-media dissertation at the University of Maryland, College Park.  Support for the project was provided by the university’s Comparative Literature Program, the Maryland Institute for Technology in the Humanities, and Bouboulina’s Museum. Consultants on the project are Dr. Madeline Zilfi, Professor of Ottoman History in the Department of History, University of Maryland; Mimi Denisi, Greek actress and playwright of Ego Y Laskarina; and Mr. Irvin Kershner, American director of films such as Star Wars: The Empire Strikes Back.  The Brave Stepped Back is a radical re-imagining of gender and the Greek identity in the nineteenth century, and foregrounds the many contributions made by women to modern Greek history.  It also provides an alternative to the images of Greek women in the historical imaginary of Hollywood and other dominant media practices. The goal of the film is to collect, preserve, and analyze the vast sources about Bouboulina in order to lay the groundwork for future biographical studies of women in modern Greek history.

Using historical documents and artifacts, interviews with Bouboulina’s descendants and specialists in the fields of Greek and Ottoman History, live footage gathered in Spetses, Nafplion, Athens, and the U.S., music and artwork of the period, as well as contemporary film and media as grounds for cultural comparison, this documentary video synthesizes multi-media artifacts to create a critical pedagogy that explores the margins of Greek history through the life and times of one of Greece’s most important revolutionaries. Interviews include:  Dr. Maria Anastasopoulos-Krimigis, former professor at the University of Athens; Mr. Philip Demertzis-Bouboulis, Bouboulina’s great-grandson and founder of the Bouboulina Museum in Spetses; Mr. Kristos Koutsis, Descendant of the Koutsis family of Spetses; Dr. Mary Pittas-Herschbach, Professor of Hellenic Studies at the University of Maryland; Dr. Charles Robinson,  Director of the Lord Byron Society  of America and Professor of English at the University of Delaware; and Dr. Madeline Zilfi, professor of Ottoman History at the University of Maryland, and author of Women in the Ottoman Empire: Middle Eastern Women in the Early Modern Era.

The Brave Stepped Back: The Life and Times of Laskarina Bouboulina premiered at the Armata Festival in Spetses, Greece on September 8, 2005, and has also been screened and collected by the University of Maryland libraries, and as part of an exhibit entitled, “E-migration. Penelopeia: The Other Journey,” at the National Hellenic Museum in Chicago, Illinois, where it is housed in the permanent collection.  It is accompanied by a university-level classroom study guide. To hear more about Bouboulina, listen to my interview about her with Agape Greek Radio: